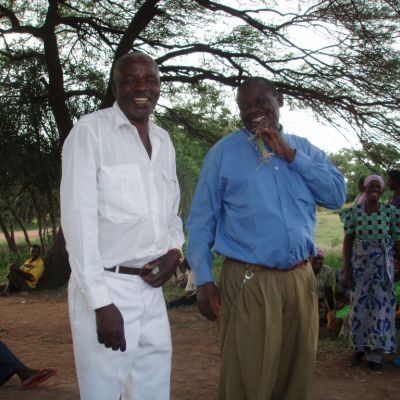 Come and help us was the cry from Tanzania quite some years ago - coming from a personal contact to a small christian fellowship in Huizen, The Netherlands. The fellowship members reacted immediately by developing a long term relationship that has deepened into lasting friendships.

Over the years the support has intensified to such an extent that sponsoring and donations were received from outside the fellowship. The immediate needs were nutrition, but it soon became apparent that we could help with education of the children, medical support and specifically the local Somada Hospital in Bariadi, water wells and irrigation.

In 2002 the Foundation "Friends of Bariadi" came into being. The purpose was three fold;

However, the deepening of friendships still remain the primary source of inspiration and the platform for further development of all activities.

The foundation has however, defined specific boundaries to which we expect our friends to adhere to;

This approach is demanding and requires extensive communication with our friends, project leaders and Bariadi District Management.

The formal goal of the foundation is " To foster the well-being and strive to increase the quality of life in the Shinyanga Region, Bariadi District, Tamzania. This goal has since been supplemented with the aim to optimize the independance and free activity of the inhabitants.

With the same respect we show towards our friends in the Bariadi District; equally so to all our sponsors and donateurs.

Some of the recent projects and activities have been;

The foundation Friends of Bariadi commissioned in November 2013 the Catholic University of Health and Allied Services. Led by Mr. Elias Charles, project leader to conduct a Situation Analysis of Health Care in Bariadi district. Four wards which are believed to be representative of the whole area of the Bariadi district were selected.

The report was completed in April 2014, and since then the different organizations have been analyzing the results and recommendations in the report. The report is very comprehensive in its content; subsequently the following areas need to be addressed.

In February 2015 a joint workshop/seminar was organized by the CUHAS, and the District Medical team in Bariadi; supported, funded, and chaired by members and experts from the Foundation Friends of Bariadi. The purpose of the seminar was to agree on the content of the report; make decisions, prioritize and put into place plans which would address many of the recommendations put forward. Further updates concerning the results and implementation plans will follow in further updates and newsletters.

The foundation continues to support the sponsoring of children’s education, water wells and food support when needed. In recent years the Foundation funded the building of a medical dispensary “Diana” in Ditima village; in addition the primary school in the village was provided with new benches and desks.

During the last 5 years the  plans have focussed on the improvement of health care services in the district, support the education programs, and expanding water management.

Renovation projects at dispensaries, staff houses in Ditima, Nyama, and Gilya have had focussed attention.

We have also been confronted with some extreme weather conditions which has effected and impacted our activity in the region. Schools and houses have lost roofs, damage to building foundations etc.

In 2017 we experienced “A Step into the Digital World” at a Secondary School in Guduwi, and the Primary School in Ditima. We found a sponsor who was prepared to finance the projects; computers, beamer and screen, computer table, and printer.

We will continue to support our friends and their endeavours in life.

For more details of passed, current and future activities go to the various areas on this website, and the Newsletters.

Advisor to the Foundation Friends of Bariadi